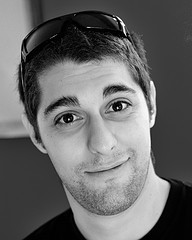 I received my PhD in Spring 2013 from the Computer Science Division at UC Berkeley, where I was advised by David Wagner. My dissertation is available for your perusal. I used to work at Twitter. Now I work at Uber.

My research is in computer security, and tends to focus primarily on software security. My research has taken steps toward:

Please see this visual representation of the topics my research has covered.

Product Labels for Mobile Application Markets. Short paper.
Devdatta Akhawe and Matthew Finifter.
In Proceedings of the Mobile Security Technologies Workshop (MoST 2012), May 24, 2012.

A Survey of Mobile Malware in the Wild.
Adrienne Porter Felt, Matthew Finifter, Erika Chin, Steve Hanna, and David Wagner.
In Proceedings of the ACM CCS Workshop on Security and Privacy in Smartphones and Mobile Devices (SPSM 2011), October 17, 2011.

Exploring the Relationship Between Web Application Development Tools and Security.
Presented at WebApps 2011 on June 15, 2011.

The Influence of Programming Language and Framework on
Application Security.
Presented at Mini-Metricon 5.5 on February 14, 2011.